Carl Thibault Fire Trucks derives from the oldest family business involved in the manufacture of fire vehicles in Canada. The original company was founded by Pierre Thibault in the early 20th century, and enjoyed an international reputation for a number of decades. This long family history and the expertise that has been transmitted from one generation to another makes the Carl Thibault Fire Trucks team experts of the highest calibre in the manufacture of fire vehicles. The Thibault family has been the instigator of many of the principal technological advances made in the field over the years. 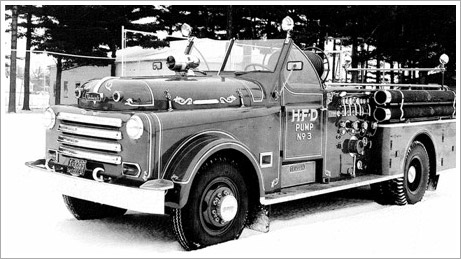 During its lengthy existence, the Thibault company has had to face many  challenge. The latest family member to take the reins of the company is Carl Thibault. Named president at age 27 following the death of his father, and only three years after joining the company, Carl lost control of the company when the other family members sold their shares to the Fonds de Solidarité des Travailleurs de la F.T.Q, (F.T.Q. Workers Solidarity Fund), the union that had employee members of the firm, at that time.

The Thibault company did not survive the change in administration. In spite of a major financial loss, Carl succeeded in raising the funds needed to launch his own company without any partners. In 1990, he set it up in an 8,000-sq. ft. building. Given the limited financial resources and a considerable workload, Carls wife had to step up and help as well. She rapidly developed negotiating and purchasing skills, and supported Carl in the various clerical tasks as well, all the while looking after their two young children.

Former employees with experience also joined the new company, including a key foreman whose in-depth knowledge meant he could take responsibility for the technical side and production under Carls direction. Carl himself was busy filling up the order book. At the same time, the old Thibault plant restarted under the name of Nova-Quintech with the Fonds de Solidarité, its former major shareholder, Bombardier and Inovatech. The competition that now began was ferocious.

From the start, Carl would have liked to operate under the name of Thibault, but this was legally impossible. Carl Thibault Fire Trucks nevertheless rapidly found itself on the road to success. A 4,000-sq. ft. extension allowed for a significant increase in production. After that, Nova-Quintech stopped its production of fire vehicles in order to concentrate on its new bus division, located in the second Thibault plant. The brand name was sold to a former American competitor of Thibault.

The first plant, solidly built on the original site of the former buildings owned by founder Pierre Thibault, had now become available. Following lengthy negotiations, Carl Thibault Fire Trucks succeeded in buying this 100,000 plus sq. ft. plant, which was ideally suited to the production of fire vehicles. Even though the plant was much too big at that time, this acquisition rapidly proved a very good business decision.

In 2004, one of Carls daughters, representing the fifth generation, joined the company, bringing with her a highly productive co-worker. In 2008, her husband, an officer in the Canadian army, left the Forces to join the company. A further candidate, possessing highly diversified manufacturing experience, also joined the group. These young and passionate people rapidly became key personnel within the organization.

Carl Thibault Fire Trucks has sales in Québec, Ontario and the Maritimes. The quality of its vehicles has contributed to its excellent reputation. Its after-sales service ensures the loyalty of its clients.

With an important market share, unequalled expertise, a reputation for quality, a young, dynamic team and a plant that has produced the greatest number of fire vehicles in Canada, we may say that Carl Thibault Fire Trucks is a most judicious choice, guaranteeing complete satisfaction.